The flight came to a rumbling halt as our plane landed at Gatwick Airport, different from Heathrow, something that I’ve learned while landing. This entire time, I wrongfully assumed that Gatwick/Heathrow were the same thing. Don’t ask me why. I don’t know, I just assumed. Flashback to a month ago when I gleefully said, “it will take us, max, 57 minutes to get to the Buckingham Palace,” trying to explain why I chose the flight with a significantly long layover, I added, “maybe we’ll get a glimpse of Prince William and Kate!” None of that mattered. What mattered was that we were traveling on a budget and this was the way to do it. The additive was being able to add another city on top of our Winter Wonderland Trip, which started in Norway, then in Iceland and now England.

We had 7 hrs and 40 mins to roam England, two of which were designated for crunched travel time from the airport to the city and then back. I use the word crunch as we really should follow airport etiquette and be there at least 30 minutes before our flight. At least. So that meant that we, realistically, had about 4 comfortable hours to roam England. To the surprise of absolutely no one, I managed to somehow missed the part that we were not landing in Heathrow but we were actually landing in Gatwick. Again, two very different airports.

“What did you think LGW was?”

Is it possible to be that stupid? It is possible to be that stupid. Or as I like to say, misinformed. Nonetheless, it was a mix up that cost us about an hour of the layover because it would take an additional 30 mins of travel time to get to London and back. Now we’re down to about 3 hours of comfortable explore time. We grabbed our things, one of which included my overly dramatic-drag his feet because he can be a real asshole, somtimes, —5 year old child, and hauled ass to the nearest exit. Before leaving the airport, we had to go through customs, lucky for us, there weren’t many people filing through. As we waited in line, this rather short woman, with round spectacles approached us and said in the most quaint, cute British accent, “have you filled out the form?” Given my our puzzled look, she directed us to the station that had all the forms neatly stacked. The station resembled a decorated recycling bin. The questions were easy and generic, basically asking us if we had anything that we were bringing into the country, anything to declare. Uhm, my soul? For the sake of small talk, she asked us what we’re doing in London and we explained to her that we were on a long layover and wanted to see the wonderful city. She looked up over her glasses and said with nearly pinched lips and in the tone that your elders typically sound like when they’re bestowing their wisdom on you (most of the time, unwanted), “Oh, I wouldn’t do that. There’s a union rail strike today.” Just our luck, right? Of all the times to be able to travel to England and we would choose the most inconvenient time to go. Adam glanced at me and gave me this look that told me that he thought it was a bad idea. Somewhere inside me, I also knew it was a bad idea, but I refuse to let another setback hold us back. We told the woman that we’d give it a go anyway and she lifted her eyebrows as a way of saying “don’t say I didn’t warn you.”

We filled out the forms and then waited in line for this woman to flip through our passport. She had this grumpy nature about her that made me wondered why airport securities were always so grumpy. Have you ever came across someone who was stamping passport books and were cheery? I imagine they’d be a dime a dozen. I also assume that having to go through a number of people and having to ask the same questions can be quite daunting. I suppose I’ll forgive her rather rude demeanor. Maybe she’s tired of having to deal with smiley Americans wanting to hurry out of customs and onto the first rail into the city. She squinted her eyes as she looked at our itinerary and said, “You know theres a strike today?” We told her that the other woman had already informed us and she added, “I wouldn’t recommend you going out of the airport.” At this point, I felt a great sting of annoyance because instead of the “thank you for your concern” that we gave, what I really wanted to say was, “What’s it to you if we were to be late, lady? Let us live!”

At this point, I assume that Adam had already accepted that there was no changing my mind and that the best thing he can do is to just go on and let me figure things out. We ordered a lyft and when the driver found us, he told us that there was traffic so it will take 2 hours (instead of the 1.5) to get to London. I looked at my watch and felt my stomach drop as the minutes just dwindled away. Part of me wondered if this really was a bad idea but my pride stopped me from acknowledging it. We hopped in the back seat and prayed that there would be some sort of traffic miracle that would make it so that we arrived to the city quick.

Up until this very moment, I had never physically seen a vehicle that had everything on the opposite side or drove on the other side of the road. I realized that I was too American when I found myself to be intensely fascinated by the entire thing. I was like a little kid learning something for the first time. I’m not sure if it was the high of traveling but everything seemed so much cooler in England. 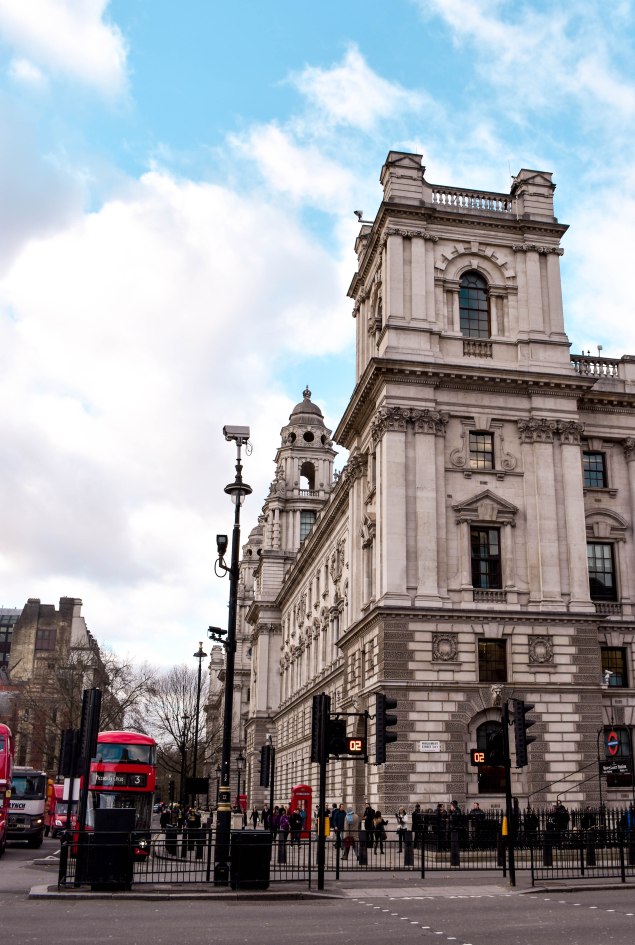 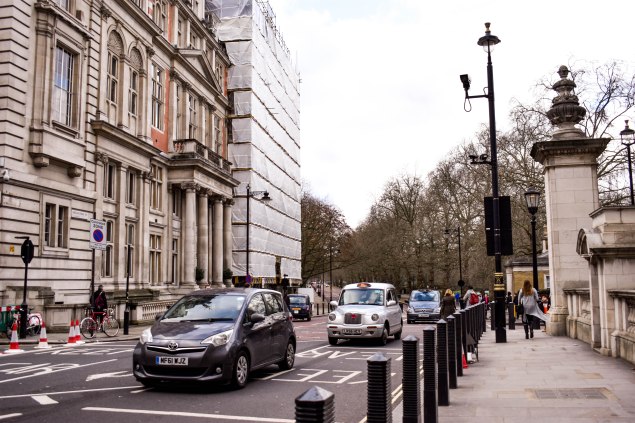 The gray building in the corner, “wow! look at the architecture!”

I was excited about seeing Buckingham Palace. Admittedly, I was not prepared for the crowd that was there. It seemed as though there were hundreds of people, from all over the world, walking around with their selfie sticks and jabbering on excitedly about nonsensical things. The guards seemed unimpressed by the crowd, standing rigid in their uniform, making sure to not make any eye contact. I heard the shutter snaps  from the cameras all around me as I was scanning the best spot to take a photo. If you’re an avid-grammer like me then you would understand the need for a proper setting. I settled to the steps in front of the statue to take a photo of the entire front view of the palace. Sadly, no prince or princess. 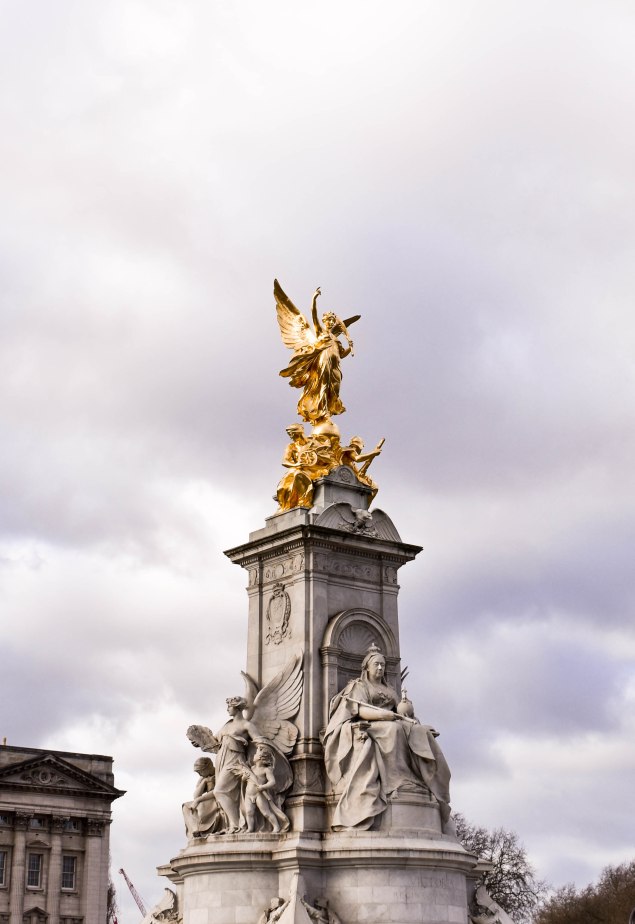 We moved along to the park that was directly beside the palace, it’s the park that had a path connecting various parks together, I think it was called “St. James Park.” We encountered a food stand that was selling waffles which reminded me of a fancy New York food cart, of course, I had to stop for one, with nutella. There is something about warm chocolate goo that makes your mouth feel thankful for working tastebuds. We ate, walked, and watched as my child took it upon himself to roll through mud. I was infuriated and then I just didn’t care. I did, however, cared when he suddenly announced that he needed to potty. Frantically looking around, there was no restroom in sight, and so, the 5 yr old boy did what 5 yr old boys do — he peed on the lawn. The tree was suppose to hide him but it’s not a 360 coverage and it was an open lawn. I finished my waffle and we continued on. 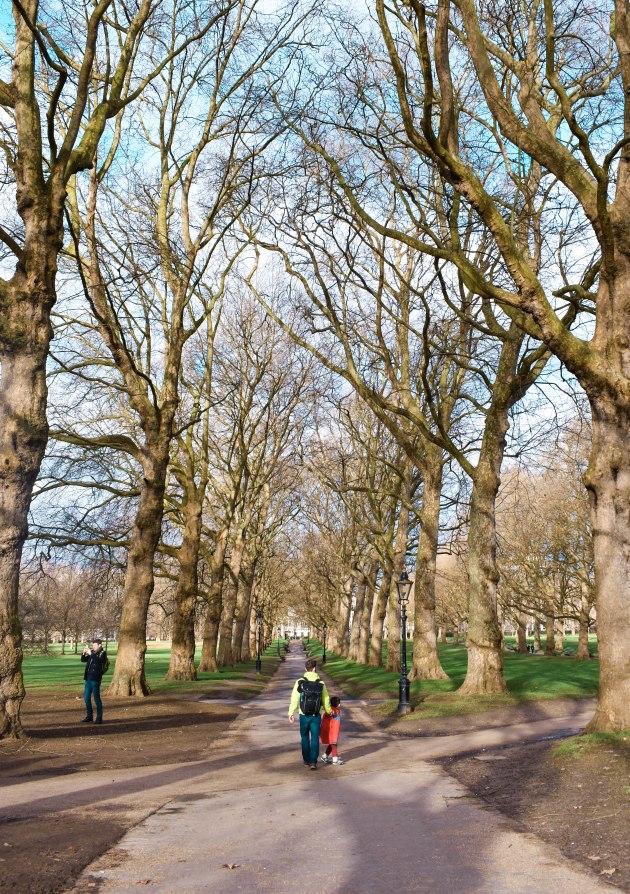 We came, we saw, and we walked. We walked a lot. The unfortunates of budget traveling but I tend to lie and say that we were just being European, enjoying walking the long walks. 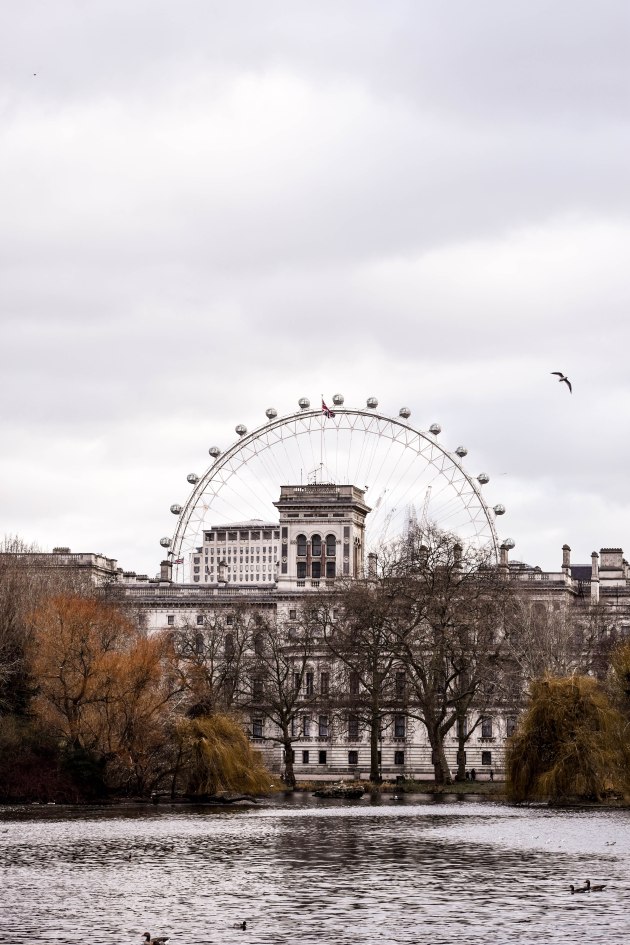 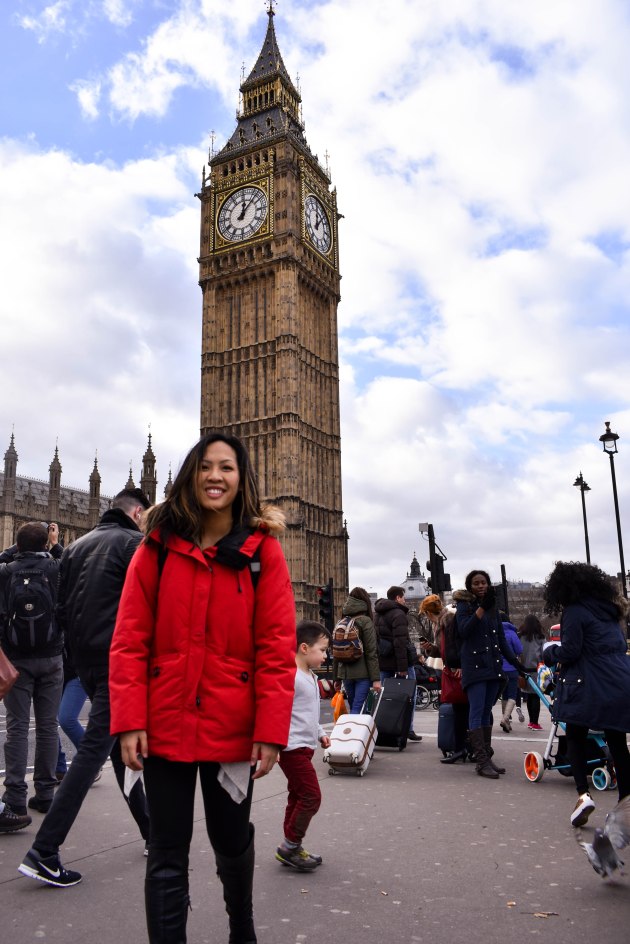 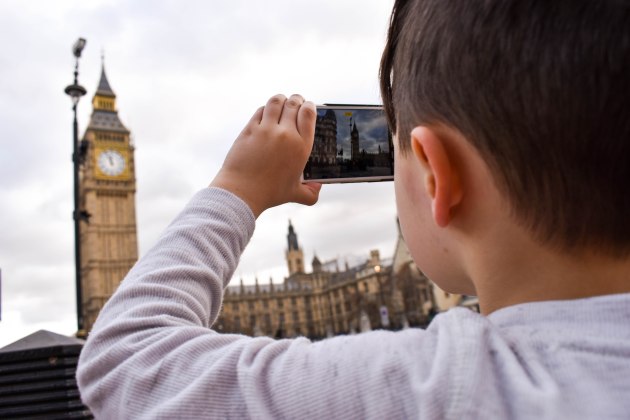 We roamed around aimlessly and I say that with great enthusiasm because we literally had zero plans. Where were we off to next? Who knows! If anyone knows me then they know that I am not a fan of concise plans because it gives me this excruciatingly painful headache. To avoid unnecessary stress on myself, I forwent any and all prior plans. There were several shopettes all over this area, we bought a souvenir for my niece (a snow globe thing because children fucking love those) and my son (a musical trolley thingy, they love those too), and a postcard (for the gram, not the actual post), this was perhaps the most tourist-y moment we had. Left or right? They had handy written messages on the ground to remind tourists to look in the opposite direction which made me wonder how many tourists gets hit by a fancy black taxi weekly. It wasn’t long before our stomach started growling, the inconvenience of having to eat. Adam had suggested finding a place that had fish and chips, which of course would not be difficult in the least. We didn’t have much time to be choosey so we settled for this little restaurant called “Red Lion.”

The ambience was wonderful the moment we stepped inside. We were seated in the corner, more private, which is something that I always appreciated especially when I’m the sort that takes aesthetically pleasing photos of her food. The waitress was friendly and accommodating to everything we asked. I ordered the roasted chicken, delicious, and Adam ordered some authentic fish and chips which he said far exceeded his expectations. Before we knew it, it was time to start heading back to the airport. 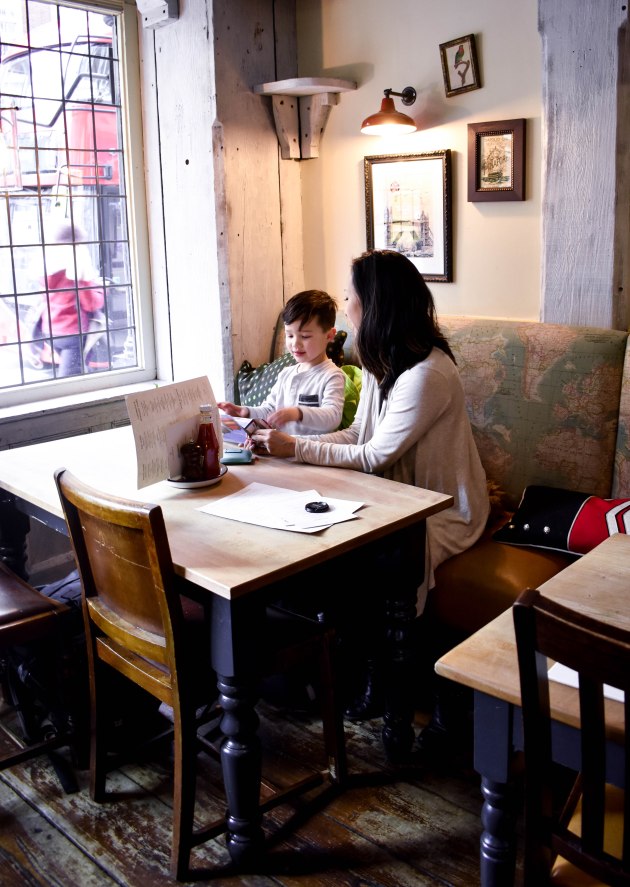 The uber met us on the corner of the road that was diagonal from Big Ben. Checking the time, we had about 2 hours until I flight departed. This was the moment when my anxiety came in because we ran into traffic. Sweat started developing on my hands and my leg did that annoying shake. If I had long nails then they would’ve all been gone. I wanted to blame someone, anyone other than me but I kept my mouth shut because it really would be my fault if things hit the fan. The sky-high angels must’ve have been on our side because we somehow managed to pull into the airport and made it to our gate, just in time! We excitedly discussed all that we were able to squeeze in during our few hours of freedom, surprised that we actually got to do it. Looking back I think it was absolutely crazy but it was well worth it. Perhaps with a better planner, they would be able to squeeze in more things but we were happy exploring the Parliament area and the surroundings. 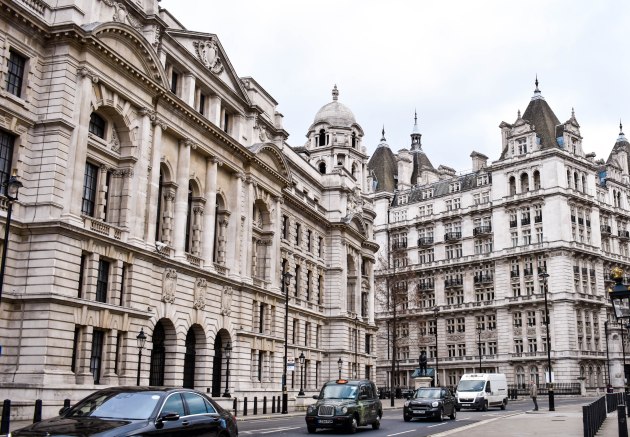 What did we learn from all this? 1. Don’t listen to the naysayers. If we had, then we would have been bored out of our minds in the airport for 7 hours and 40 minutes instead of enjoying a nutella drenched waffle. 2. Try not to worry and I say this with great understanding that it will be immensely difficult not to but, really, don’t worry! Just enjoy yourself. 3. Be flexible. Things are not always going to go as planned, even with the little plans that we did have — things clearly got screwed up. Regardless, I greatly enjoyed the little time we did have in London. It gave us a taste of what it’s like to help fuel for a future trip. Cheers!

One thought on “7 hrs and 40 mins layover: To Explore or Not Explore?”