When I was in Jr. High, someone told me that Venice would disappear one day. Water level would get too high and the entire city would be submerged. Like any naive 14 yr old, I felt rather cheated because I truly believed it could be swallowed at any minute, and the panic of not being able to go there really set in. To be honest, even in my teenage years, all I really wanted was to have a bucket list of places that I’ve been. Something to show off, be proud of. A list of accomplishments if you will. Because to me, nothing is better than to have the wisdom of seeing the entire world. It was not until these recent years that I was able to start my travel journey, checking places off as I booked another flight. Venice was an easy decision when we were building our summer itinerary.

Italy in the middle of July was sweltering. I was uncomfortably sticky with sweat as we followed our Airbnb host to our home. “Google Maps does not work good here,” she explained as she turned another corner. I noted that it was the fifth time we’ve turned and also the fourth time that she’s said in very thick Italian accent, “it’s right around here.” Each turn led to another bridge, or a narrow alley way. As small as Venice is, I was already getting a headache trying to memorize the mental map of the grand canal to our Airbnb. It also didn’t help that each bridge looked like the last and all the buildings blended in with one another. Still, I felt comfortable.

There is a unique sort of beauty about Venice. Its water stained pastel colored walls had character — evidence of a place that has lived. Remove the tourists, and you’ll notice things like clothes hanging out on the line, the sound of paddles pushing against the water, and the aroma of pasta being cooked. I would like to say that we enjoyed sitting around and taking in the surrounding but that would be an absolute lie because we spent the entire time roaming until our feet were sore and the SD card filled. We are, after all, quite the tourists. 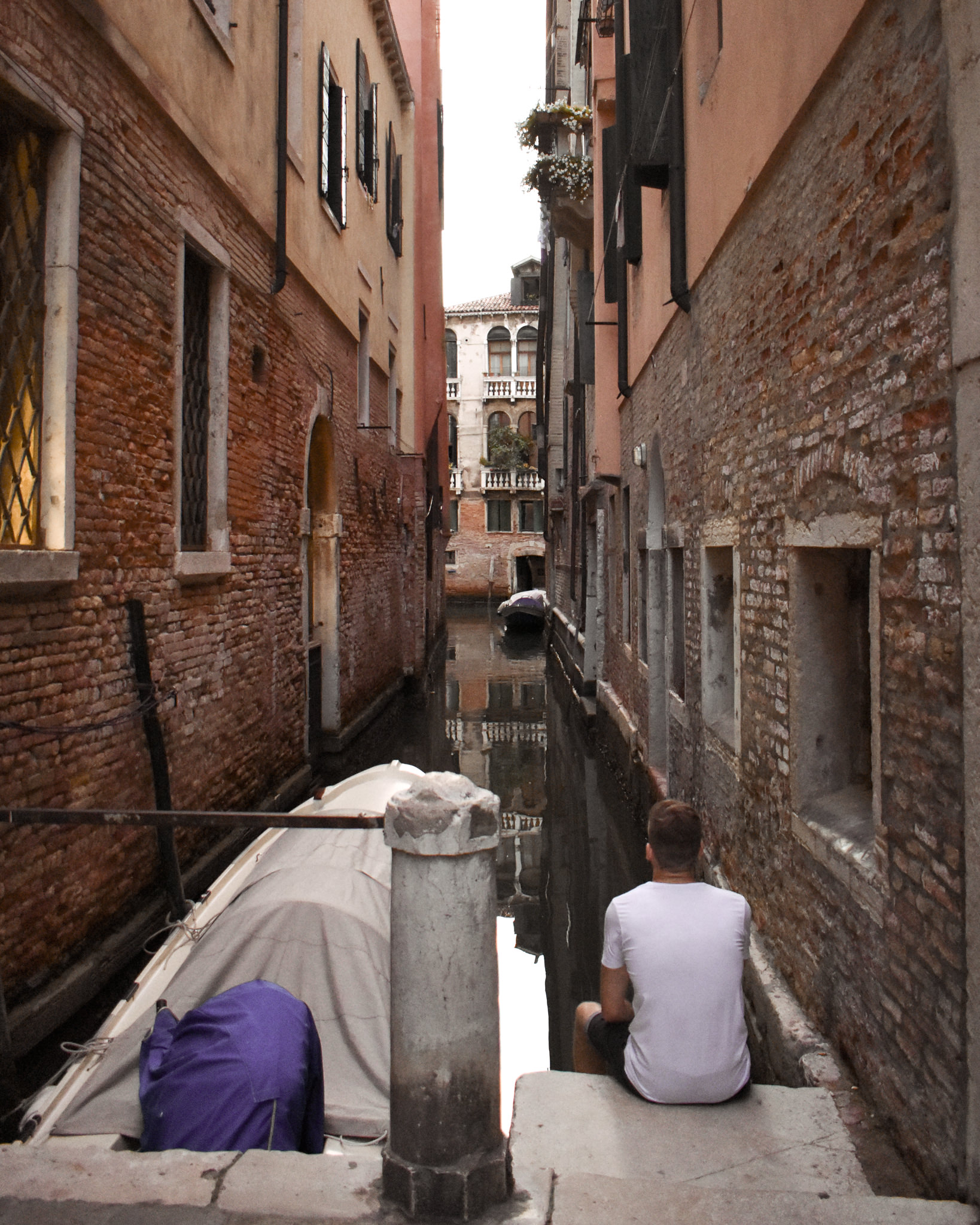 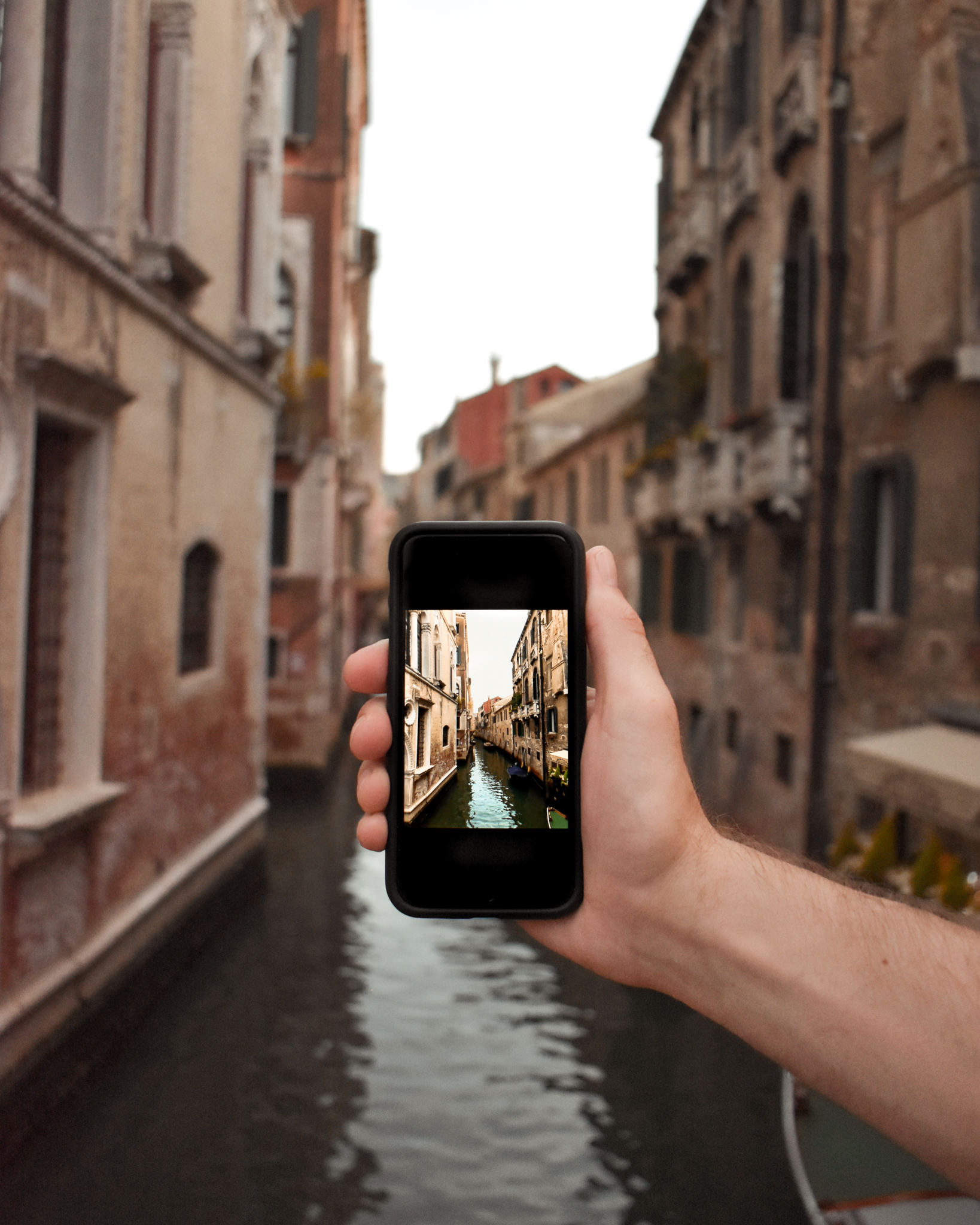 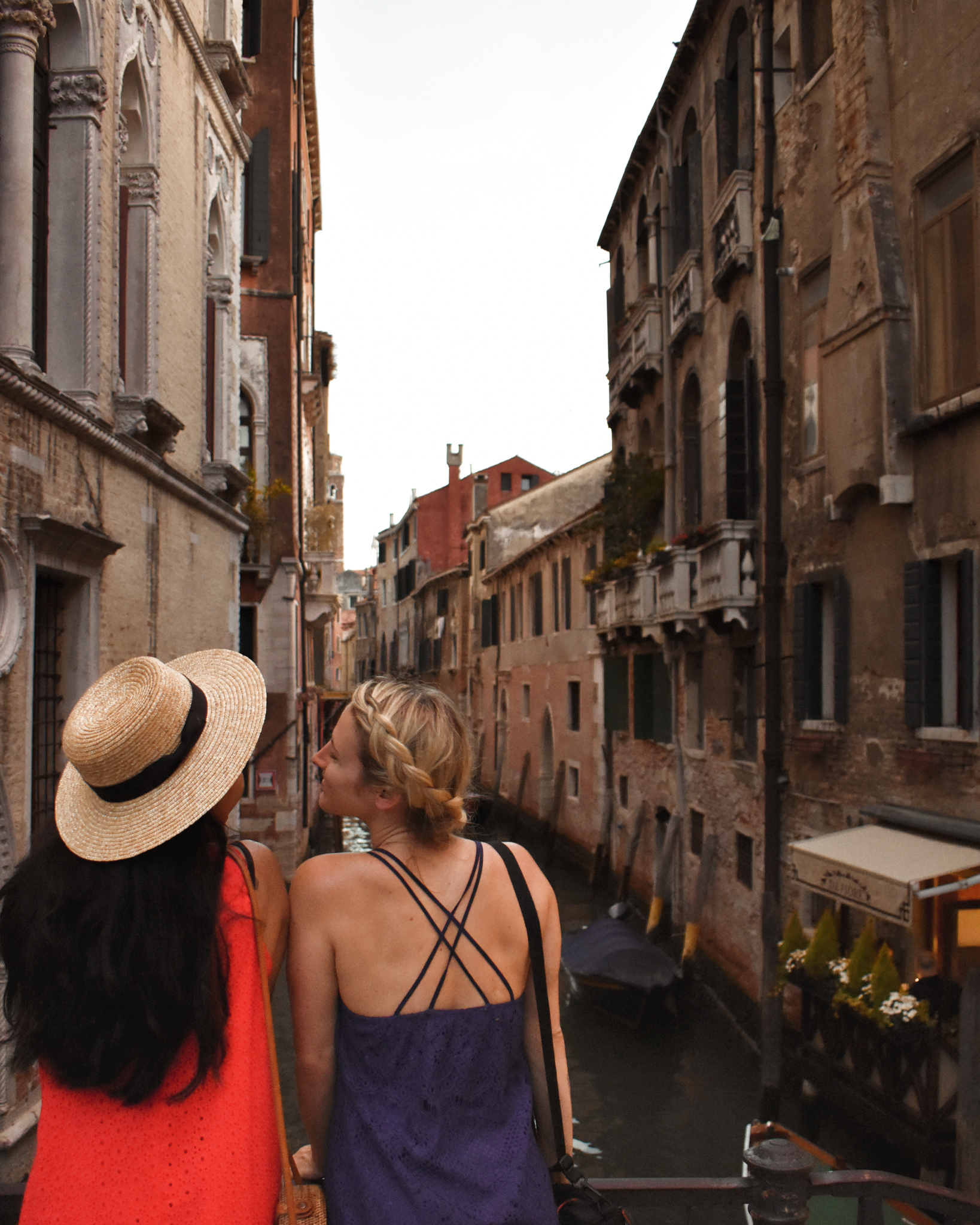 Did you know that there’s a charge to dine in? Most of the restaurants were charging 2 euros for people to have a sit down meal at their establishment versus those who would do take-away. Maybe they’re using that money to tip the people who cleans the tables? I don’t know. All I wanted from the moment I got there was a nice seafood dinner. It took ages to choose a place because we were trying to look up reviews for each restaurant. When we had finally settled to this place that had a mouthwatering seafood display, we were turned away because I made the mistake of telling the waitress that I had a nut allergy. Even though they were a seafood restaurant, they did not want to risk feeding someone who had any sort of food allergy. It was only really irritating. If you think it’s terrible to be turned away, imagine how disappointed you’d feel when you’re at the level of hanger? I can assure you that I’m the absolute worst when it comes to being hungry. I turn into some sort of raging monster that would destroy anyone in her path. No one was safe. Thankfully we found food and the sheHulk retracted back to her corner.

Before the trip, I promised my son that there would be loads of ice cream and I happily kept my promise. Everyone has their “thing” that they like to do while on vacation, for me that’s seeing the importance to indulging in the finer things in life such as an endless amount of sugary treats. There was one day where we ate gelato 4x. Though it wasn’t cheap, it was worth every lick. Each flavorful taste made our mouths happy because there is nothing as good as a nice serving of gelato on a hot day. Put it this way, if you’re in Italy and you’re not eating gelato several times a day— you’re wrong. 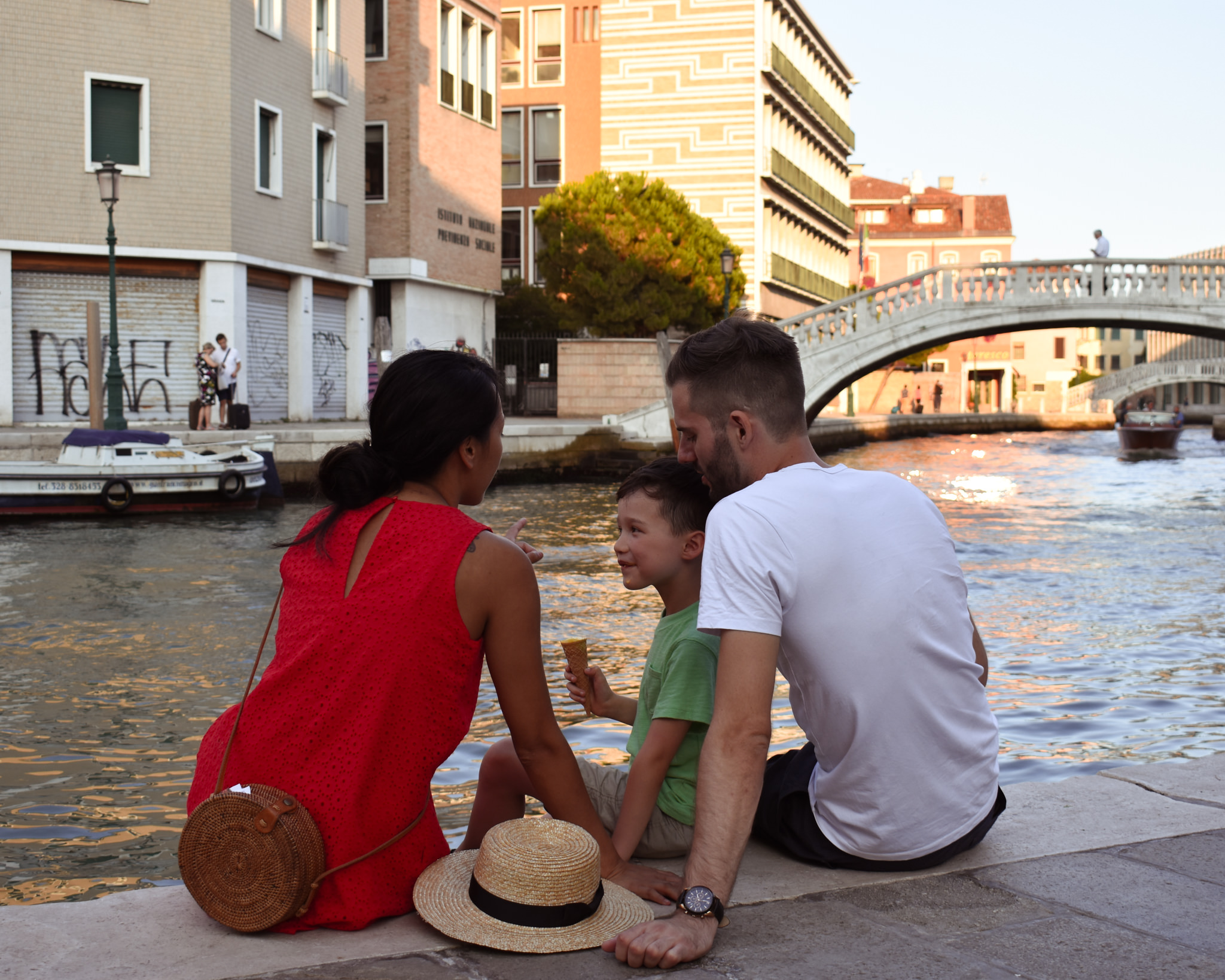 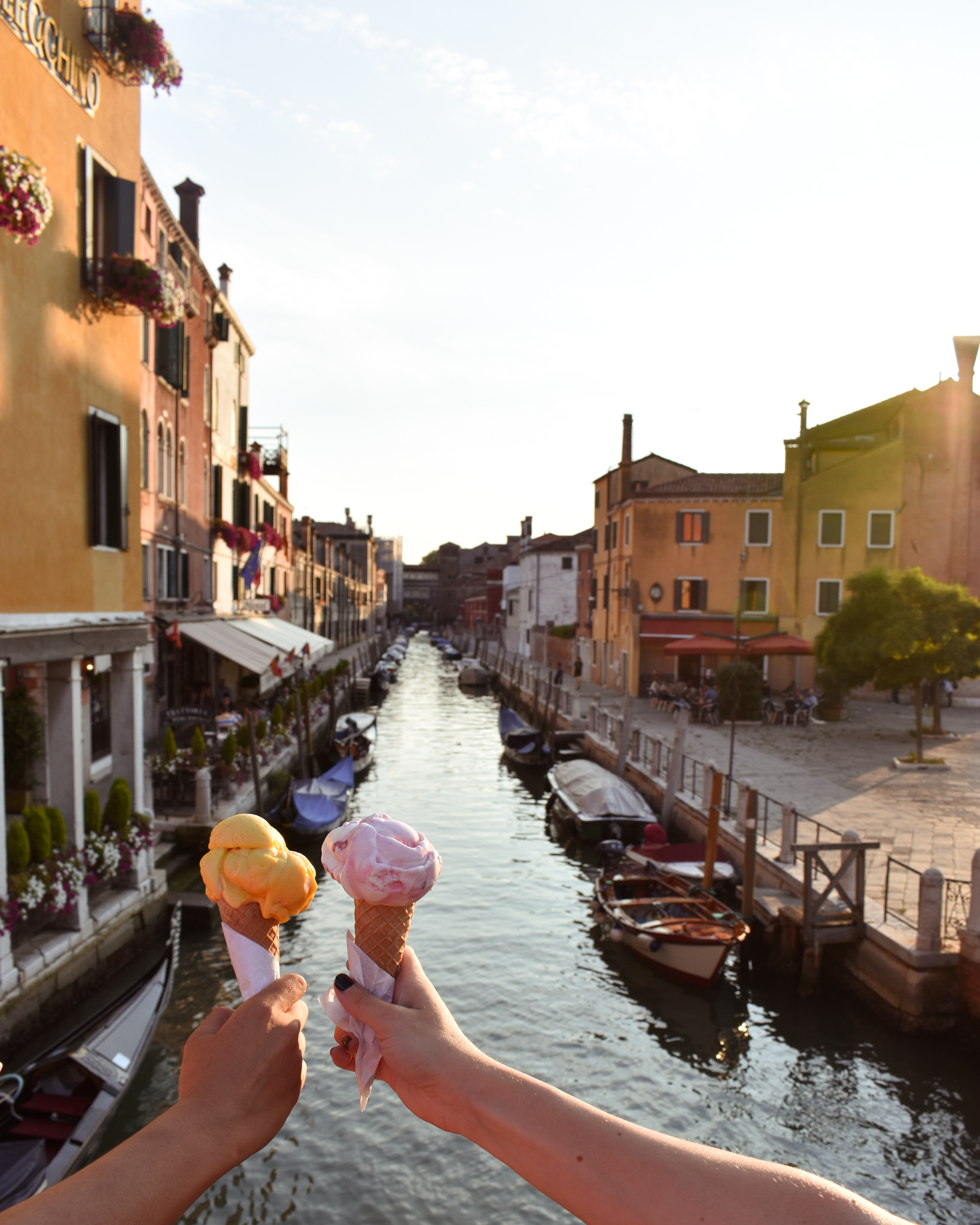 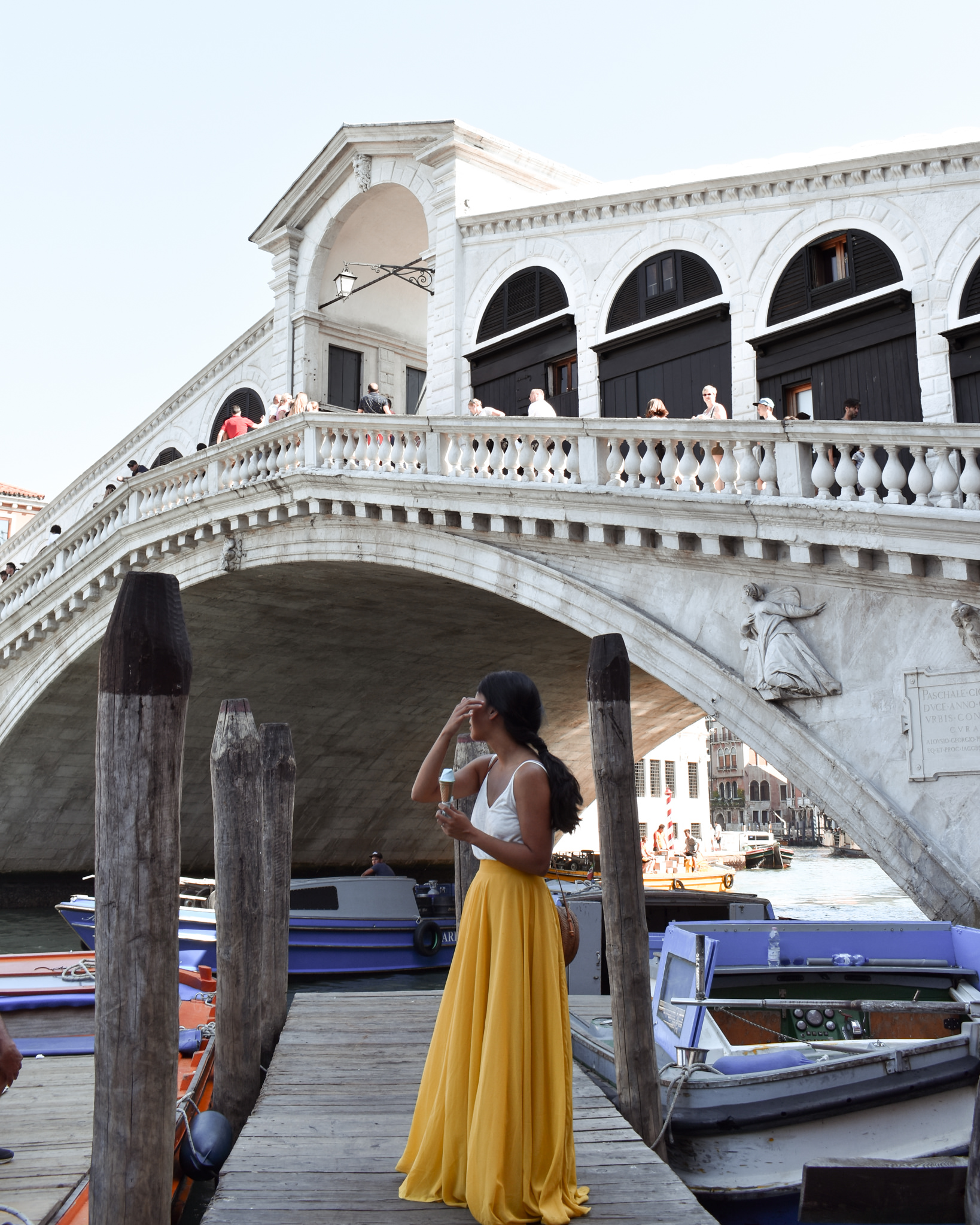 Instagram makes you want to do things like eat pizza by the canal or be photographed devouring a plate of spaghetti with the noodles hanging from your mouth. What we ended up doing was eat our “build-your-own-pasta” out of a take away box as we walked around looking for a cool gondola. Before Venice, I had it in my head that the only way to get around Venice was with a gondola, I hadn’t realize that you can just walk everywhere because water taxis and gondolas are ridiculously expensive. And when you’re broke as hell, trying to see the world on a budget, you can’t afford more than one ride. I didn’t have any built up expectations when it came to gondolas. I thought it was a lot more interesting to watch the gondolier in their straw boater hat steering other passengers as we watched from above. Sadly, we didn’t get to hear any of them sing. I don’t know much about Venice’s gondola culture but I do know that it’s a signature experience that visitors should do. 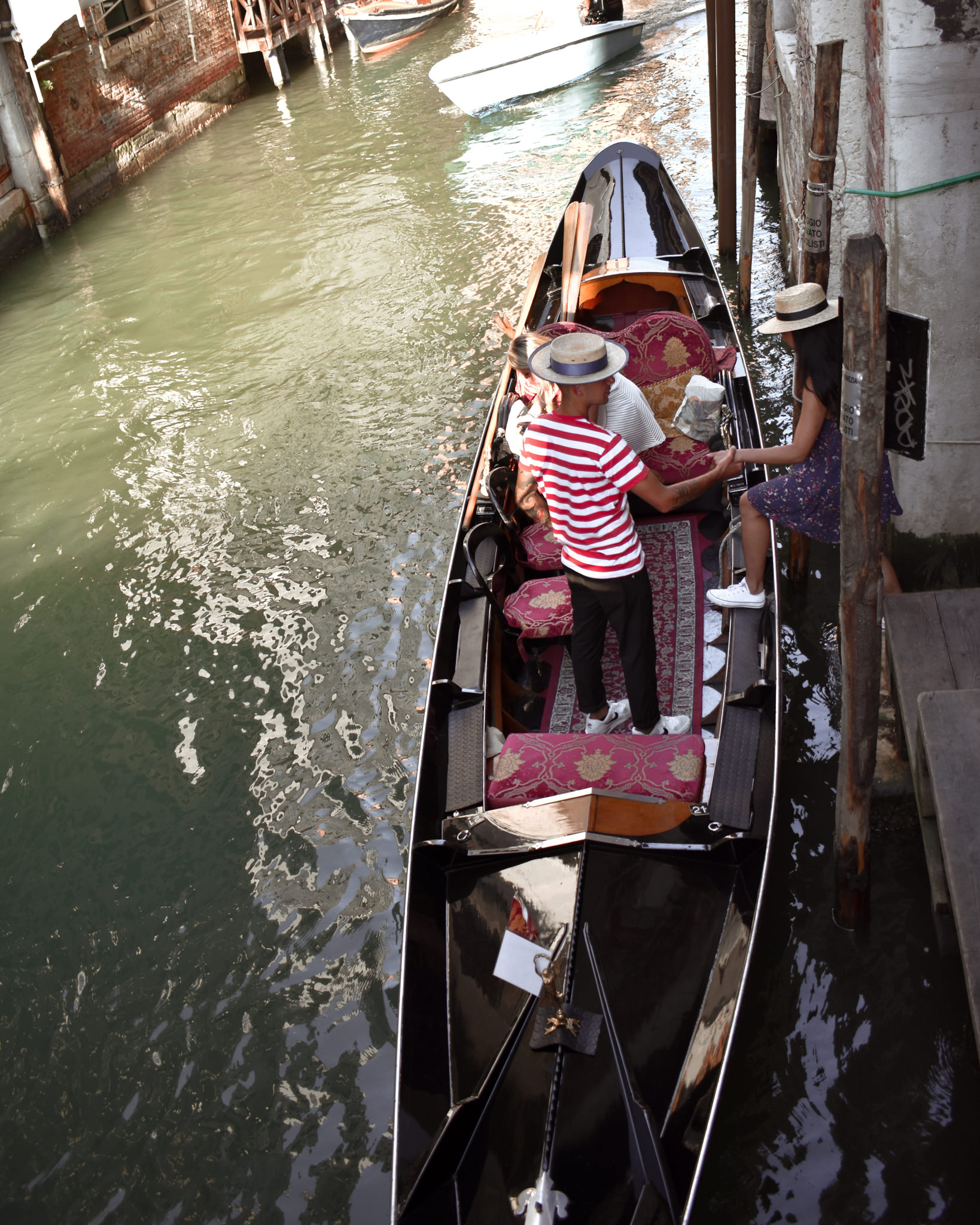 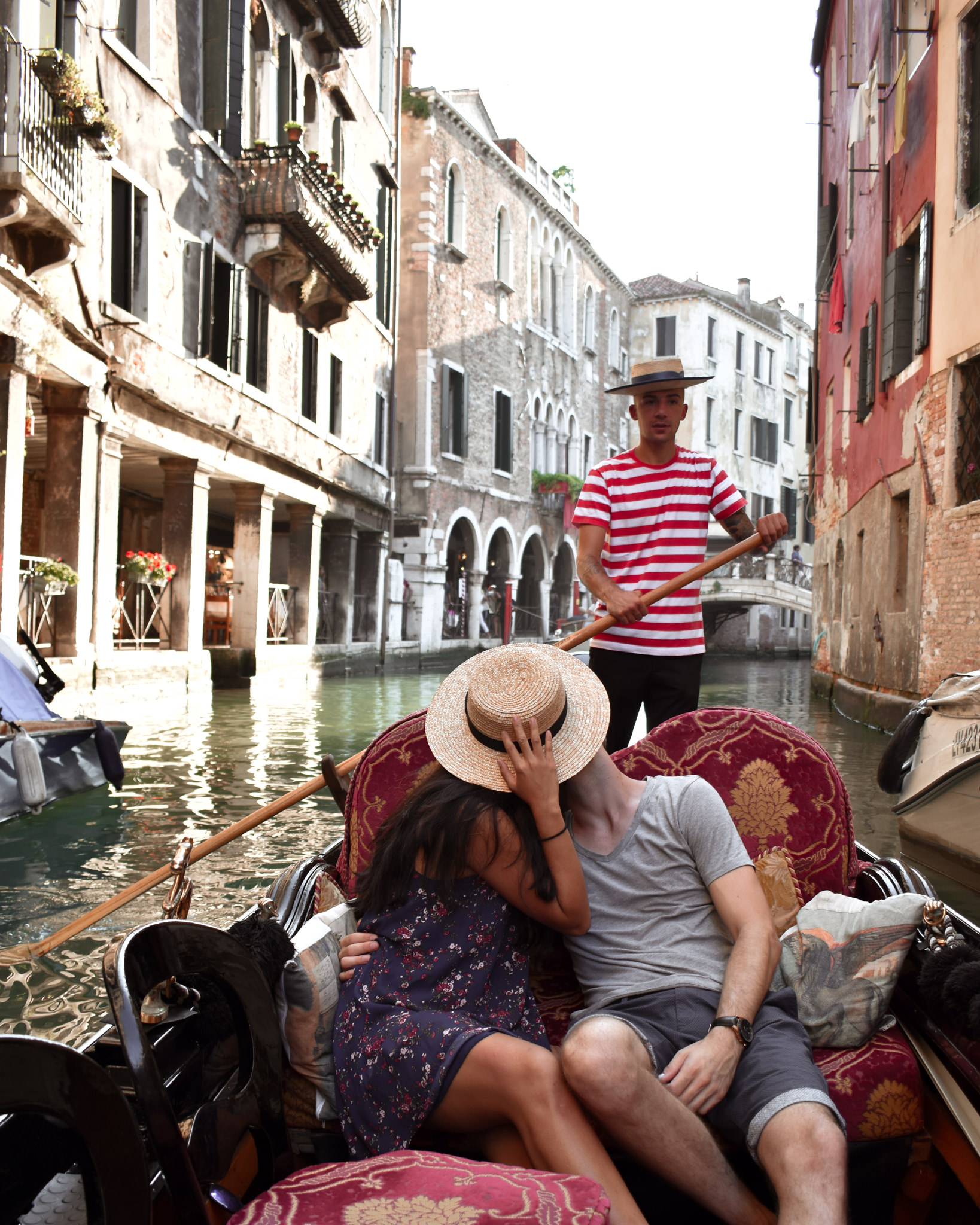 We had gone to the market to buy a few things to cook at home. The place was incredibly small. You had to be mindful of all the shoppers around you, which were a lot, because each time you would turn, you’d be bumping elbows with someone else. This market was also where we bought cheese for our wine and cheese picnic by the canal. We didn’t buy any signature cheeses like brie because that was much too expensive. One block cost the same amount as all the ingredients for our homemade chicken noodle soup. We settled on the cheap stuff and you get what you paid for because the cheese tasted of rubber. Looking back, the entire last night makes me laugh because we had gone down to make this beautiful cheese platter with our cheap cheese and the olives, crackers, prosciutto, and whatever else we managed to put together — a beautiful set up for the perfect instagram photo — but what ended up happening was the cork screw that my friend had bought from one of the trinket store, broke and she had to yank the cork out of the bottle by gripping the bottom of it with her bare feet and yanked the top. It was a hilarious scene. Then we tried to convince my son, who was running around the quarter like a chicken with his head cut off, to take the photo but he only took two off angled photo that even a photo editor like myself can’t fix. We gave up and just sat there, eating our rubber cheese and watched people cross the bridge. 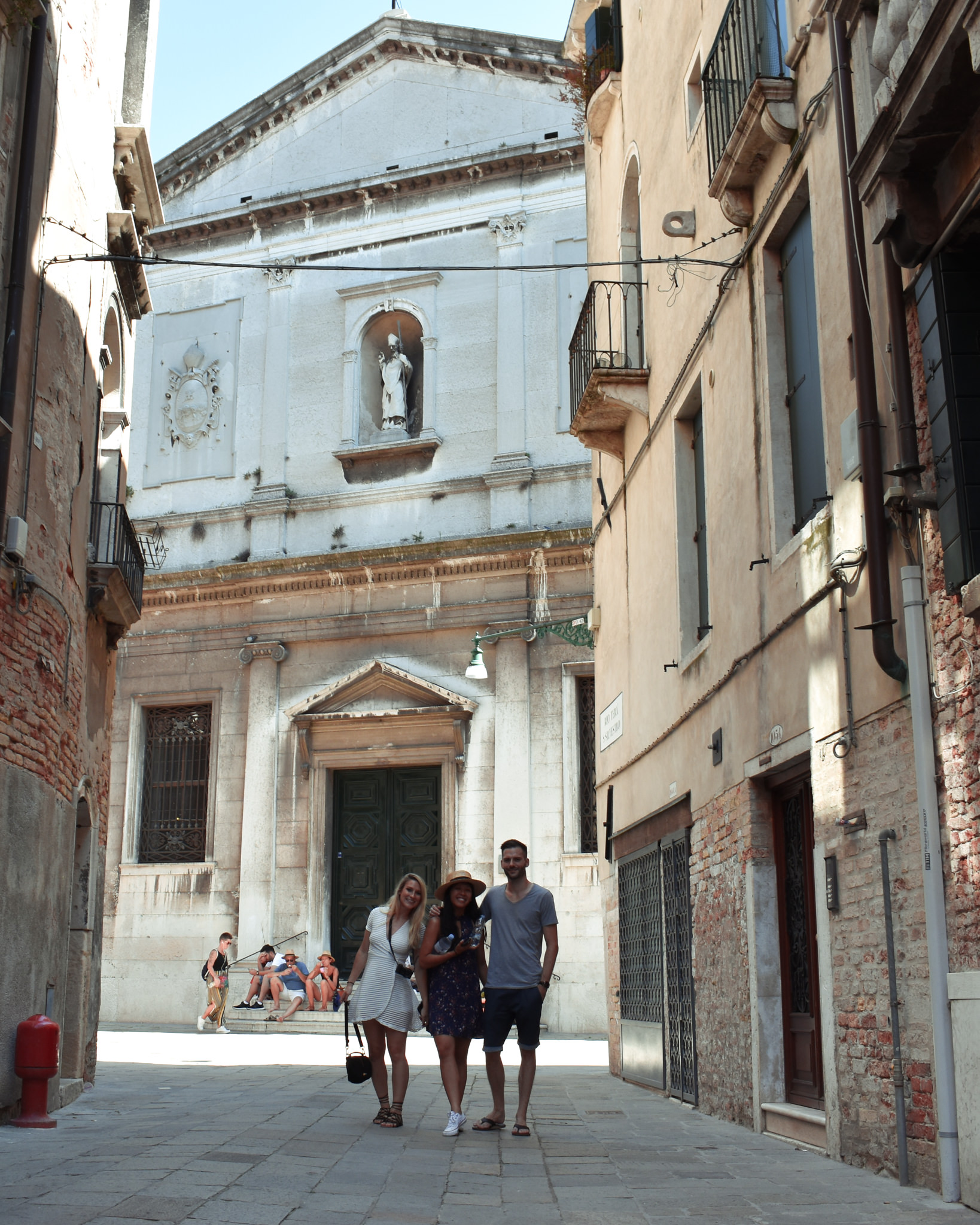 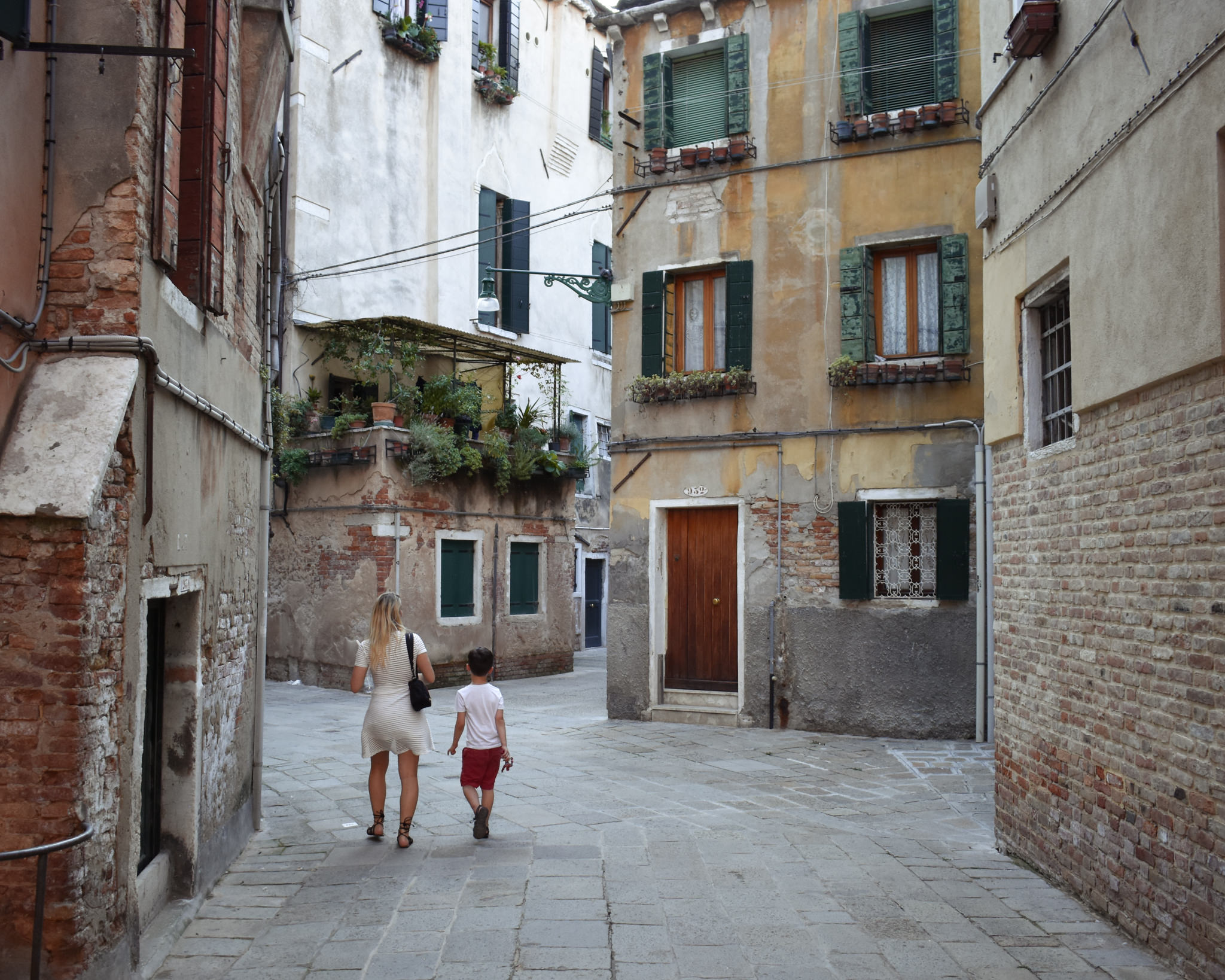 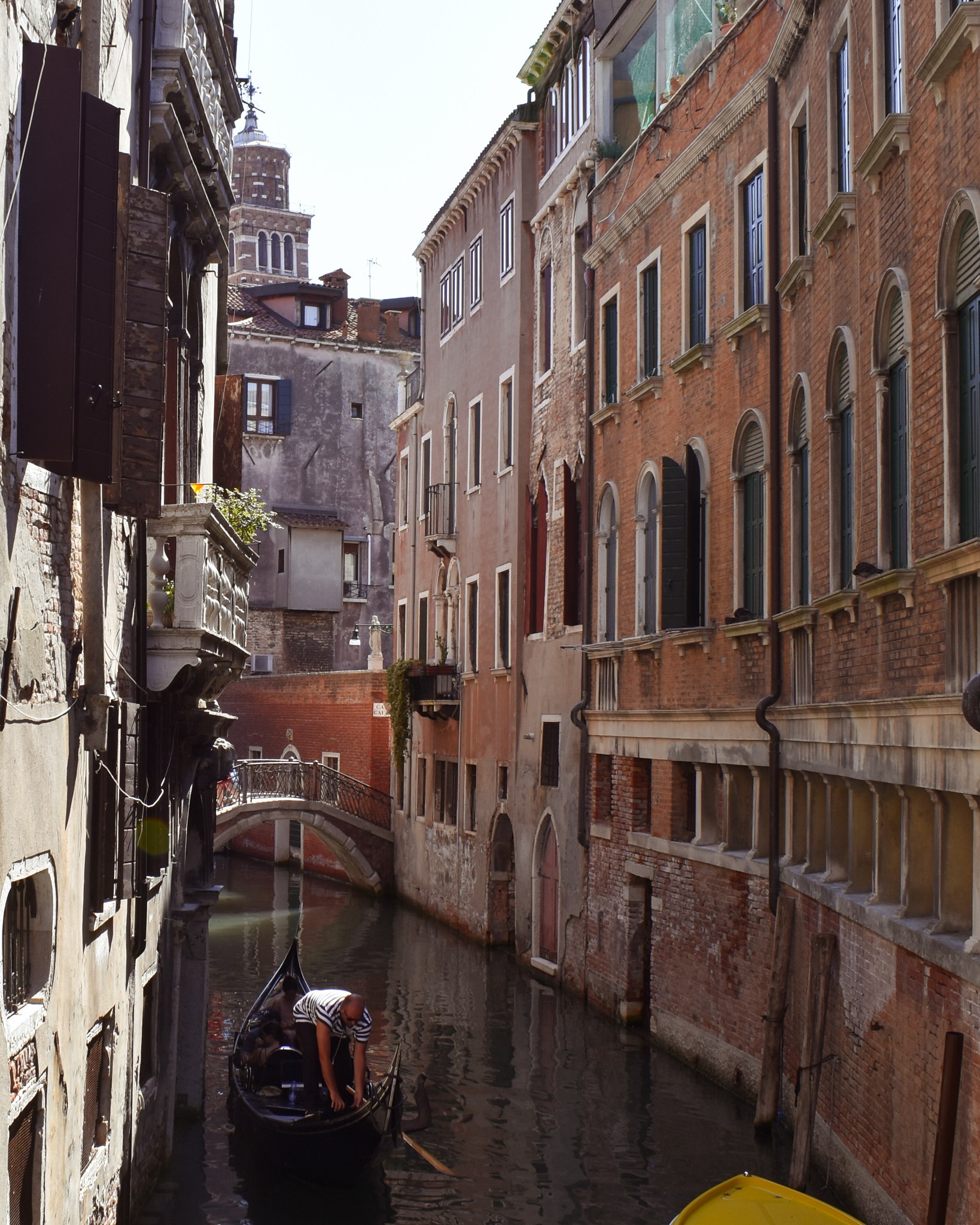 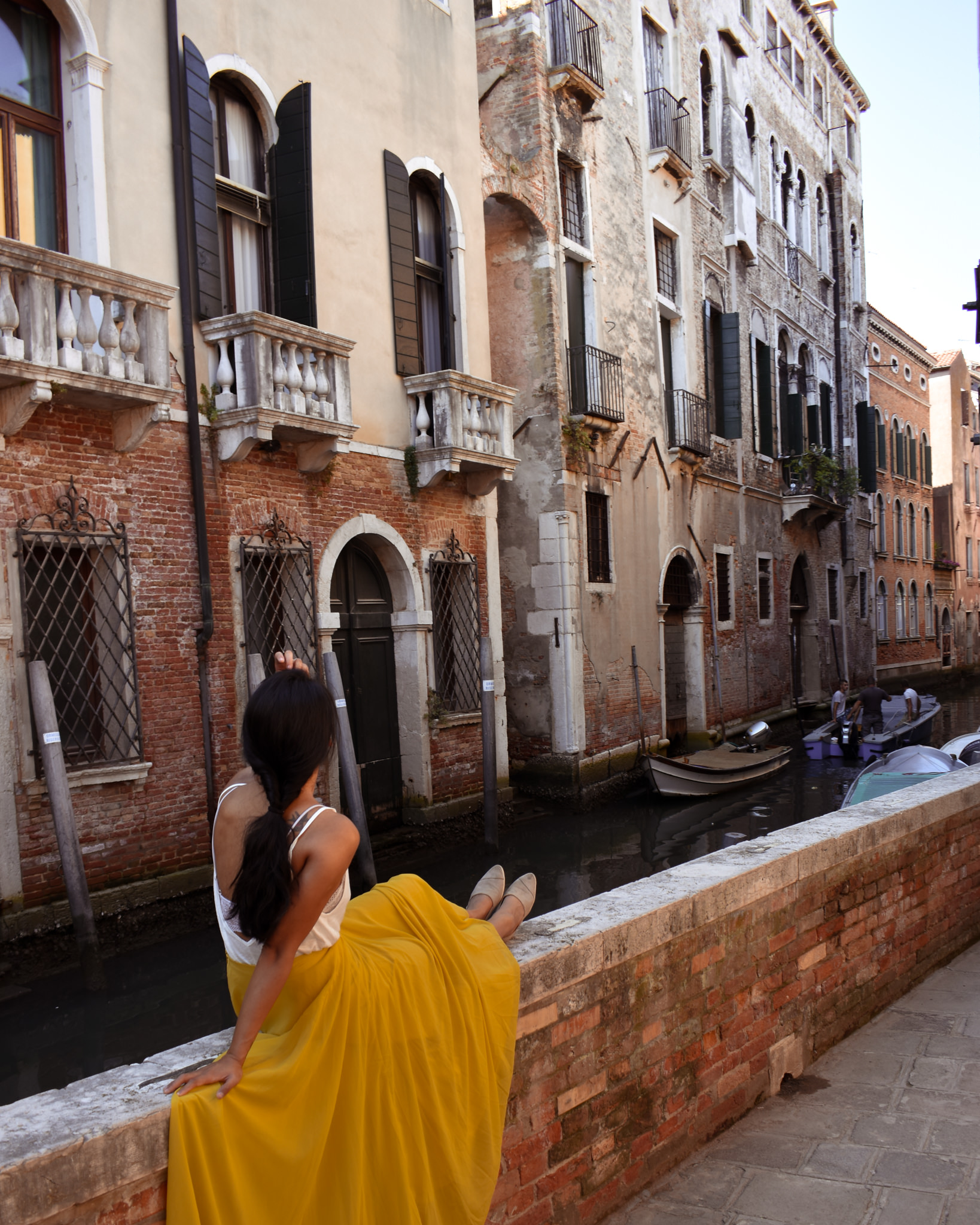 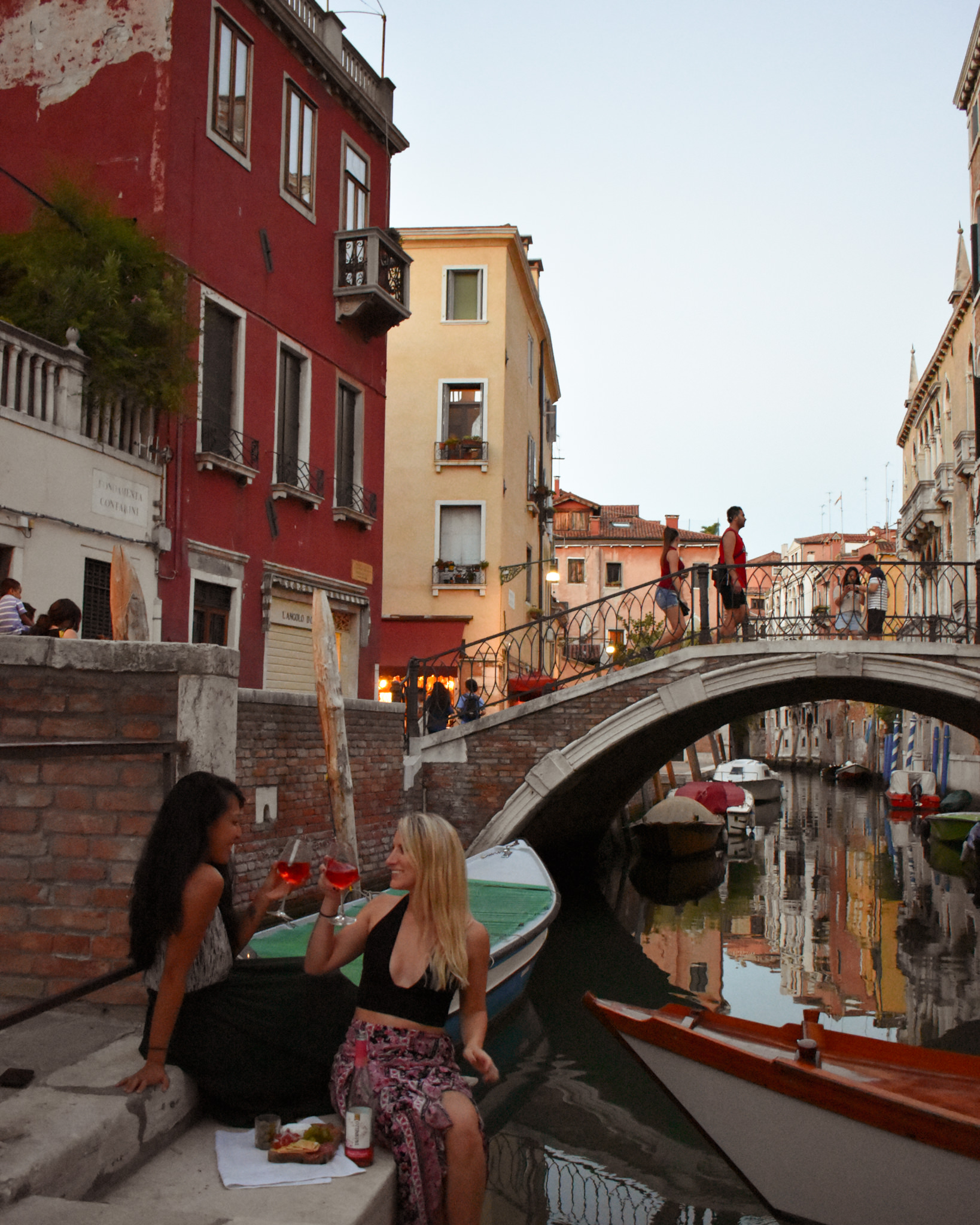 Venetians are friendly people. I enjoyed listening to Italians talk. In a way, it sounds like you’re part of some family get-together because they’ll talk to, over, and around you and they’re very loud. They have such excitement in their voices and their body language is always so animated. You can tell what an Italian is feeling based on how they use their hands when they talk. There were a few times when we would try to get Google Maps to work. Creatures of habit. We must’ve looked really confused because someone stopped and asked if we needed some direction. It was difficult navigating around because each little twist and turn was a new street. When someone told you that it’s three street up, you wouldn’t find what you’re looking for because you forgot to count a little alleyway as a street. Also, they did not have their streets labelled. My advice for anyone who going roam around to do just that, just roam. Get lost. Find your way later. You’ll simply stress yourself out if you’re just looking for specific places.

Looking back, Venice did not disappoint in the least bit. Before going on the trip, I found an article that said Venice can be underwater by 2100 if nothing gets done with global warming. While it might take a while for Venice to completely go under, tourism to Venice may die out sooner than that. They already have several months where there are temporary stilted walkways on the streets to help pedestrians get around as it floods. That pinches my heart because no amount of blogs, photos, or stories from people who have been to Venice will ever have the same effect as actually visiting the place for yourself. 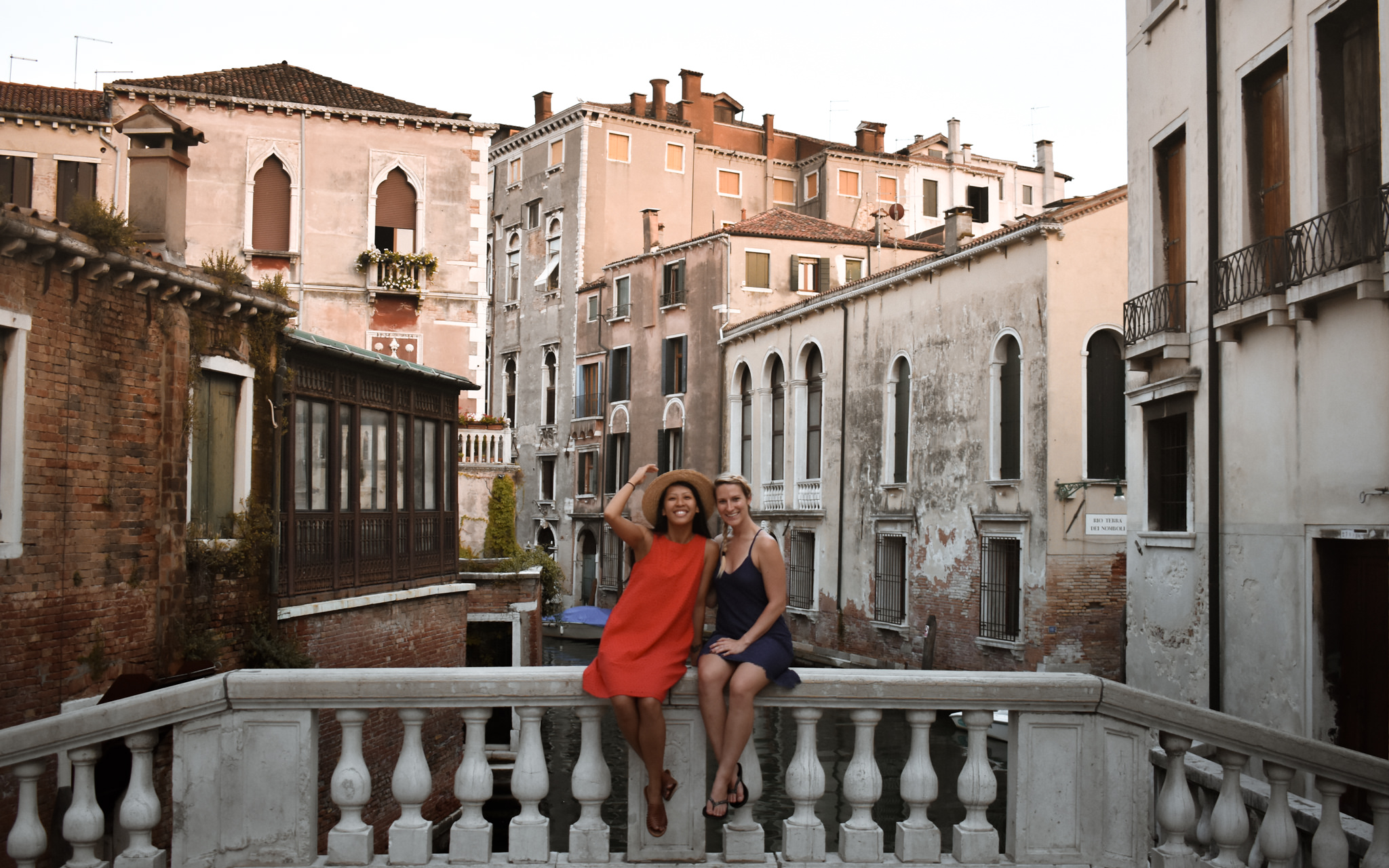